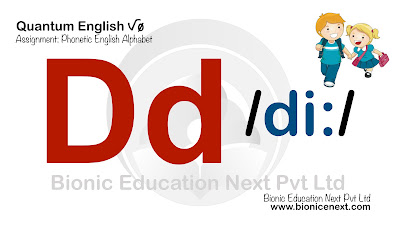 There are different Usages of the letter D.
1. the fourth letter of the English alphabet
A B C D E F G H I J K L M N O P Q R S T U V W X Y Z
This letter denotes the fourth in a set of items, categories, sizes, etc. e.g. "D batch of medicines is created after the A, B and C batches." It also denotes the fourth of four or more hypothetical people or things. e.g. "A person is sitting facing towards North, the B person is sitting facing towards South, the C person is sitting facing towards East and the D person is sitting facing towards West." It also denotes the fourth highest class of academic mark. e.g. "Chintu gets D grade marks, this year." It also depicts the second lowest socio-economic category for marketing purposes, including the semi-skilled and unskilled personnel.
2. Music & Chess
In Music it denotes the second note of the diatonic scale of C major. And, in Chess, it denotes the fourth file from the left, as viewed from White's side of the board.
3. Abbreviations
It is used to denote 500 in the Roman Numerals as D = 500. In the US, D represents Democrats; whereas, R represents the Republicans. D = Depth, when H = Height and W = Width. It denotes dimensions as in 2D or 3D Movies. Besides, D letter of English Alphabet is also used in Germany as International Vehicle Registration.
4. Science
In Chemistry D represents the word Dextrorotatory as in D-Glucose. Moreover, D is the symbol for stable Hydrogen isotope Deuterium. In Physics, D = Electric Flux Density. In Mathematics, D = Diameter and in calculus, dy/dx shows small incremental aspect.
5. Contraction
In English, Would = 'd and Had = 'd. e.g. "I'd told her that she'd not agree with us." Here I'd = I had and She'd = She would.
The most Common Noun which is used to learn this letter at the Nursery level is Dog; D for Dog.
Posted by Cyborg Bionic on Saturday, March 09, 2019