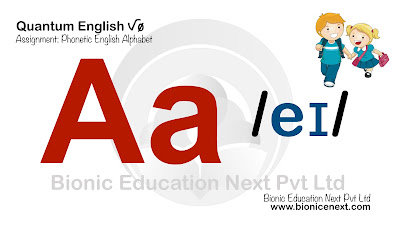 There are different Usages of the letter A.
1. the first letter of the English alphabet
A B C D E F G H I J K L M N O P Q R S T U V W X Y Z
This letter denotes the first in a set of items, categories, sizes, etc. e.g. "A batch of medicines is created first and then B batch and so on." It also denotes the first of two or more hypothetical people or things. e.g. "A person is sitting facing towards North and the B person is sitting facing towards South." It also denotes the highest class of academic mark. e.g. "Neha gets A grade marks and tops the class every time." Further, it denotes the human blood type (in the ABO Blood Group System) containing the A antigen and lacking the B Antigen. In the UK, it also denotes the most important category of road, other than a motorway. e.g. "the A39" It also depicts the highest-earning socio-economic category for marketing purposes, including top management and senior professional personnel. Sometimes, the letter A is also used to denote a shape like that of a capital A. e.g. "Triangle is having an A-shape" Numbers printed on right, it denotes a series of international standard paper sizes each twice the area of the next, as A0, A1, A2, A3, A4, etc. and A = first Vowel.
2. Music Chess Geology
In Music it denotes the sixth note of the diatonic scale of C major. The A above middle C is usually used as the basis for tuning and in modern music has a standard frequency of 440 Hz. And, in Chess, it denotes the first file from the left, as viewed from White's side of the board. In Geology, it denotes the uppermost soil horizon, especially the topsoil.


3. Abbreviations In Playing Cards: A=Ace and where Q=Question; there A=Answer. "Q: What is Google? A: Google is a Search Engine on the Internet." Besides, A letter of English Alphabet is also used in Austria as International Vehicle Registration.


Ampere is a unit of Electric Current that equals to a flow of one Coulomb per second, A=C/s; whereas, Angstrom is a unit of length that equals to one hundred-millionth of a centimetre = 10−10 metre in SI. This is used mainly to express tiny wavelengths and interatomic distances.
5. Determiners in Grammar
a and an are the two faces of the same coin having a meaning of ONE or SINGLE. e.g. "This is a cat." Moreover, a/an is also used to represent the membership of a particular class. e.g. "He is a doctor." An interesting usage of a/an in grammar is that a/an is used before and adjective to represent a whole class. e.g. "We should help a poor person." Moreover, 'a' is used before the words that start with a consonant sound; whereas, an is used before the words that start with a vowel sound. e.g. "a chair, a university, an umbrella, an apple, a one eyed crow, a European Man, an honest person and so on."
The most Common Noun which is used to learn this letter at the Nursery level is Apple; A for Apple.